The Attorneys-General (Or: The Inevitable Baton Change)

Posted on February 6, 2013 by lewisblayse

The royal commission’s recommendations will be considered by a different federal Attorney-General to the one who established it, and probably by a different government, if opinion polls are to be believed. Former Attorney-General, Nicola Roxon (pictured below), last week announced her resignation, effective immediately, and also announced her intention not to re-contest her consistency (Labor’s second-safest seat) at the election on 14 September this year. 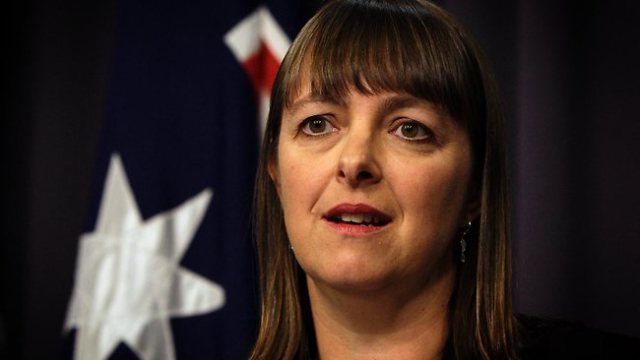 In a teary speech, she indicated she wanted to spend more time with her young daughter. The Prime Minister, Julia Gillard, also shed a tear. Ms Roxon will retire at 45 with a parliamentary pension of $235,000 per annum. In her final speech, she noted the plain packaging of tobacco products and the establishment of the royal commission into child sexual abuse as the highlights of her short term in office.

She was replaced yesterday by Mr Mark Dreyfus, the third person to hold the position in as many years. If the polls are right, after the election, the new Prime Minister, Tony Abbott, would be expected to appoint Senator George Brandis as Attorney-General. Given that the royal commission will terminate before the following election, it will be Senator Brandis who will review the recommendations of the commission.

Many church leaders, particularly from the Catholic Church, have been critical of the motivations for Ms Roxon’s royal commission, using terms such as “witch hunt”. This appears to be very unfair to Ms Roxon. She stuck her neck out for the religious organisations when she proposed a bill to change the anti-discrimination legislation. The bill would have made it an offence to give offence to them. Many critics pointed out that no-one has a right to not be offended. Some even suggested that a derogatory remark about a rival football team could land a person in court, so wide was the definition of offence.

Ms Roxon, further, in her bill, wanted to enshrine the right of religious organisations to discriminate in employment against those who were regarded as transgressing their belief systems, even when they were using taxpayers’ money. Some commentators have highlighted the fact that the Prime Minister herself could be discriminated against because she is not married to her partner, the “First Bloke”, Tim Mathieson. Not only that, she is a declared atheist.

The person responsible for shepherding the bill through the Senate ratification process, Senator Penny Wong, would be fair game since she is in a same-sex relationship. Indeed, almost all of the government would be excluded from employment by Salvation Army and Muslim organisations for occasionally partaking of alcoholic beverages.

Unfortunately for Ms Roxon, only a couple of days before her sudden resignation, the government yielded to public outrage and dropped these changes. As a Sydney Morning Herald readers’ online poll indicated, two-thirds were against the legislation, even when organisations were not using public money.

Overall, it will indeed be an odd situation where a royal commission is established under a centre-left philosophy and implemented by a centre-right government.

TOMORROW: Where are we now?