Intrafamilial Abuse and Foster Care (Or: Still Swept Under the Carpet) 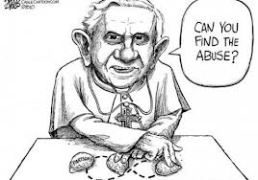 Foster care is the new preferred system for children taken from their parents forcibly, when there have been problems for them in their original family. Until about the 1980s, the preferred system had been institutions known as Children’s Homes run usually by various church organisations. Today, the government still outsources its responsibilities to church organisations such as Anglicare under the new foster system.

With regard to protection of the state wards, little has changed other than the obvious one resulting from institutionalisation. For example, an enquiry by former Supreme Court Justice Ted Mullighan in South Australia released in 2008 heard from 103 people who said they were abused while in foster care.

In 2010, the Victorian Ombudsman, George Brouwer, found sexual abuse to be widespread in the foster system in that state. This was largely put down to the government’s “failure to adequately screen foster carers.” He further noted that, “it is unacceptable that these children were harmed when there was information available to indicate that their carers posed a risk to them.”

In 2003, the Queensland government had to acknowledge that abuse in a foster family had occurred over a 10-year period because the government had failed to respond to concerns about the family. It was particularly embarrassing for the then Premier, Peter Beattie, himself a former ward of the state, because he had just been calling for a Royal Commission into child sexual abuse in the wake of the Peter Hollingworth scandal.

Much of the problem has to do with the big bucks involved in the foster care system. As Dr. Susanne Babbel has noted, “foster agencies receive money for each placement. If a child is removed from a placement, the agency can lose the commission” and this can, “sometimes lead to lenience when evaluating conditions.”

Take the case of Life Without Barriers (LWB), the largest non-government provider in NSW. It has grown at a phenomenal rate in recent years. LWB has responsibility for over 1,000 children and has government contracts worth in excess of $200,000,000 per year. It outsources recruitment of carers to individual contractors who receive a continuing fee for each placement of a child they have made. There is a financial disincentive to report abuses because the contractors would lose this ongoing income. Scrutiny of carers is therefore minimal. As the LWB spokeswoman stated, “We rely on people to behave well and mostly they do.”

Scrutiny of this organisation arose because it was found that a man with a history of child sexual abuse convictions had abused a teenage boy he was fostering. LWB was aware of the allegations at the time it handed over the boy to his abusers. Further allegations have since arisen with the same foster carer. Although the agency did not conduct an assessment of the man as required, it claims all the same to have acted in accordance with policy and the law. It has since referred the case to the Ombudsman, and, “would review its practice if the Ombudsman recommended changes.”

The horsemeat scandal demonstrates the quality control difficulties of an over-extended production chain. Here, we have the state governments responsible initially for fostering children. This responsibility is directly handled by an individual government department. Then, often, a church or other NGO takes the reigns and passes responsibility on to a “provider” agency. However, that provider then uses other organisations to recruit and monitor foster carers. Government has been able to deny direct responsibility because the problem is several steps away from it. While it has accepted financial responsibility, it has not accepted functional responsibility.

The royal commission rules out “intrafamilial”, or in-family child sexual abuse. However, foster care is the responsibility of all participants in the ‘production chain’, not just for those involved in the final step. Findus Foods cannot simply blame some dodgy abattoir in Romania for horsemeat turning up in its frozen ‘beef’ lasagna. Similarly, government must take ultimate responsibility for its foster care system all along the line.

Notably, the Australian Human Rights Commission called on the Prime Minister to include this category of abuse victims, in its submission on the terms of reference. As that submission states, “although child sexual abuse in foster care arrangements may occur within a family home, there remains institutional responsibility for those foster care arrangements” because, “private organisations and institutions recruit foster carers and supervise the care.”

[Postscript: A study by Dubner and Motta (1999) found that of children in foster care who experienced sexual abuse, over 60% had PTSD].