More on the NSW enquiry (Or: Upstairs and Downstairs Priests) 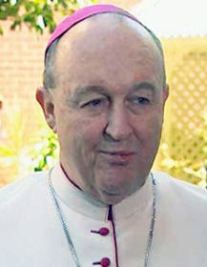 Commissioner Cunneen said that the inquiry had “already issued a large number of summonses seeking production of documents from relevant persons and organisations. The inquiry has commenced reviewing and examining certain documents already produced. Further summonses for production are likely to be issued.”

The Catholic Archbishop of Adelaide, Philip Wilson (pictured above), is among a number of senior church figures who have been ordered to appear at the inquiry. The secretary of the Australian Catholic Bishop’s Conference, Father Brian Lucas, has also been summoned. Father Lucas was also a priest in the diocese early in his career, and is likely to be questioned about this period.

Peter Gogarty, a victim of abuse by priest Jim Fletcher, has complained to police about a “conspiracy of silence” because he was preyed on in an upstairs bedroom in the same house in the diocese in which Archbishop Wilson lived at the time. Archbishop Wilson has also been accused by Mike Stanwell, a former principal of St Joseph’s Primary School in Merriwa, NSW, of covering up a sexual assault of an eight-year-old girl by priest Denis McAlinden in 1985. Further, Archbishop Wilson was a teacher at St Pius X High School in Adamstown in the late 70s, at the time pedophile priest John Denham was abusing students

Should make for an interesting session when the good Archbishop appears flanked by his very expensive lawyers.