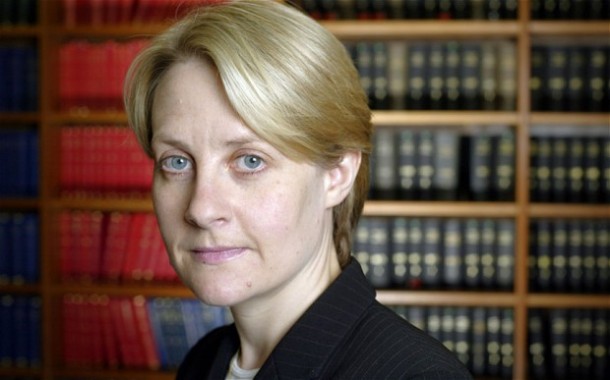 British Barrister Barbara Hewson (pictured above) has called for the age of consent to be lowered to 13 in order to stop “the persecution of old men” such as Jimmy Savillle  and BBC luminary Stuart Hall, who has admitted 14 charges of indecently assaulting girls as young as nine.

Hewson refers to Hall’s crimes as “low-level misdeameanours” and claims that “ordinarily” they would “not be prosecuted”. Further, she has called for an end to victim anonymity in rape cases. Not surprisingly, her comments in an on-line magazine (Spiked Online), to which she has contributed regularly for years, has caused a storm of protest. Just to round things off, she also calls for reducing the time for the statute of limitations.

Presumably, she can look forward to a lot of paedophile clients. Defending them is fast becoming a boom industry. Just to show she is not a johnny-come-lately in the market, she can point to other similar comments from the past.

Take, for example, her comments on the case of Baron Bloom who was convicted in 2002 of indecently assaulting a 15-year old girl, after getting her so drunk on champagne she collapsed and was taken to hospital. Her opinion piece was entitled “Girls behaving badly.”

Hewson claims that “However discreditable Bloom’s behaviour, is an indecent assault conviction really warranted in these circumstances? You don’t go out on the town with someone at his expense, insist on going back to his place, take your clothes off and go to bed with him and his mate, and not expect some sort of sexual advance. These girls weren’t prepubescent children – nor could they plead sexual ignorance.”

She goes on to claim, that despite their age and state of intoxication, they really were the abusers and not the victims. “In fact, it’s remarkable that a prosecution was brought at all. Ms A and Ms B invited sexual attention”, she muses. Just to be sure ageing paedophiles know whose side she is on, she continues with the broad statement that “We are becoming inured to the spectacle of men in court facing serious criminal charges.”

On the matter of victim identification, Ms. Hewson sums her views up with the comment that “If would-be complainants decide that going to court is too much hassle, that is a decision they are entitled to take. It should not be seen as a failure of the criminal justice system.”

Now, Ms. Hewson is in the U,K, and not here. However, she is an example of something this blog has attempted to highlight through local examples. This is that the paedophile side (cover-up proponents etc.) will point to an “expert” or “prominent person” who sides with them. So we hear of such people being appointed to the Catholic Church’s PR unit, for example. We only hear what has been put in the press release. Digging further often reveals inconsistencies.

On the surface, if she had not made such a stupid statement, Ms. Hewson is both prominent and expert. She is, after all, a leading barrister. She appears to be a good feminist, who helped form the Association of Women Barristers, for which she was awarded an honorary fellowship of the University of Westminster “for services to law”. She is regarded as a shining light for her work with “equality of women at the Bar,” and women’s reproductive rights in Ireland.

[Postscript: An on-line petition calling for Ms. Hewson’s sacking by her law firm is available at http://www.change.org/en-GB/petitions/law-society-to-fire-barbara-hewson-senior-barrister-public-at-hardwicke]