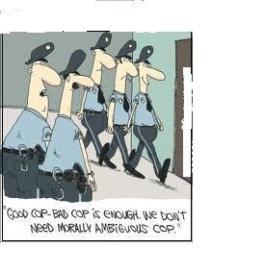 The police are very busy in the Newcastle area of New South Wales. Overworked, stressed, under-resourced. So goes the story from people like Assistant Commissioner Carlene York. Given that resourcing police is the responsibility of the NSW state government, this is very damning criticism of Premier O’Farrell and his predecessor, Premier Keneally. Perhaps, a government spokesperson needs to reply to this.

Surely, no one would suggest that under-resourcing is an excuse for doing nothing? Surely, there is no suggestion that Detective Fox’s “colleagues” would prefer not to investigate priests? Surely, we’re not all stupid?

[The Newcastle Catholic Church diocese holds what it calls “The Men’s Breakfast”. The stated aim of the breakfast meeting is to engage in “fellowship and laughter”. Most meetings see between 20-25 unidentified men attending. They have a guest speaker occasionally. A recent one was Joel Howlett, a magician. Another, who found the time out of his busy schedule, was Max Mitchell, Police Commander of Newcastle, who spoke on crime rates in Newcastle. Presumably, there were howls of laughter (and increased fellowship), when the apparent low rate of offending by clergy was raised.]

After Detective Fox handed his report on paedophile clergy to senior Hunter Valley police, it took at least five months before Assistant Commissioner York formally decided to establish a strike force. It was hard to decide which area command was least over-worked. Obviously, it would be churlish not to support the claim that Detective Fox’s command was over-looked simply because it was the most over-worked? Ms. York was clearly being concerned for Detective Fox’s well-being, wasn’t she?

Detective Inspector Dave Waddell, in his evidence, also claimed over-worked staff as the excuse for not doing more. He was the crime manager at the Lake Macquarie Local Area Command, near Newcastle, when Detective Fox maintains he was told to stop investigating child sexual abuse by two priests in the area.

Mr. Waddell spent a lot of his valuable time denying a lot of things. Things like being concerned about the reputation of senior Catholic clergy in the Hunter Valley when deciding not to investigate some child sexual abuse allegations. Like denying telling local Newcastle Herald journalist, Joanne McCarthy, he felt sorry for former Maitland-Newcastle Catholic Bishop, Michael Malone. Like denying telling Detective Jacob the matter “needed to be handled with diplomacy.” Like denying saying there was no prospect of any criminal investigation as key people were deceased.

One might say that Detective Inspector Waddell was in a prolonged state of denial.

Just for balance, she did deny a few things. For example, she denied she was not taking into account the interest of the victims. She also denied she ordered the search of Detective Fox’s office while he was on leave.

Perjury is a serious offence. Given the conflicting accounts, there should be some convictions following the presentation of evidence to the enquiry. To date, the only suggestion of a prosecution has been attached to Detective Fox for tweeting during proceedings. It is beginning to look like we may be heading towards a farce, but fortunately the issues will re-emerge at the Royal Commission and be subject to a higher level of scrutiny.