Italian boutique perfume-maker Silvana Casoli, who has made a private cologne for Madonna, amongst other celebrities, has made an individualized cologne for the former Pope, Benedict, on commission.

One small-minded commentator, however, made the following observation, which is clearly in poor taste: “The Vicar of Christ should have no great need to smell any different from the average Joe. It’s a good bet Jesus smelled more like sweat than a Sylvana Casoli fragrance.”

Ms. Casoli attracted papal attention to her products following a couple of gigs for priests on a pilgrimage to Spain. They were called “Eau de Faith” and “Eau de Hope”. The ingredients for Benedict’s new perfume are a closely-guarded secret, much like the Coca-Cola syrup formula. Casoli said that she had created a delicate smelling eau de cologne “based on his love of nature”. The scent is believed to “mix hints of lime tree, verbena and grass.”

Australian Cardinal, “Georgie” Pell, was among the first to compliment Benedict on his new smell (see picture above).

Lesser mortals can buy “off-the-shelf” stuff from the Pope Emeritus’ perfumer. She describes her ready-to-wear perfumes, which are accessible to all, as “made with noble and rare essences which leave an unforgettable olfactory message for him and her”.

The line, which features “sensually elegant” men’s fragrances, also contains a scent named “Perfume of Italy”, which sums up the smell of Italy’s “seas, mountains and countryside”, and a perfume called “Cannabis”, which is described as “hypnotic”. One that bishops and cardinals might wish to avoid is “Nude”, a scent inspired “by the smell that only a woman’s skin emanates in a state of ecstasy”. They are stocked in all good specialist priest stores.

Benedict must have been less than happy with his previous fragrance, or maybe he just thought it was time for a change. The previous one, “Benedictus”, made by Excelsis (pictured above), had been available to all of the faithful for as low as $27 for a 2-ounce spray bottle. It can be obtained from the Catholic shopping site given below.

The creator of the fragrance, Dr. Frederick Hass, built it on three meaningful ingredients: linden blossom (from Joseph Ratzinger’s native Germany), frankincense (which symbolizes the Holy Land) and bergamot (which originates from Italy, where the Pope resides).

The marketing blurb for “Benedictus” goes like this:” Benedictus is the marriage of linden blossom from Benedict’s native Germany with frankincense from the Holy Land and bergamot from Italy creates a subtle and dignified fragrance, befitting a man of finely cultivated tastes. Barely perceptible is a nuance of citrus, and as it evolves, a discrete hint of musk. The overall impression is one of understated elegance. A slightly astringent and balsamic quality makes it a soothing and refreshing aftershave.”

Some users’ feedback is worthy of reprint for sheer eloquence. For example, “Benedictus starts off slightly sweet and citric, a very light citrus I attribute to bergamot. A green herbal smell kicks in a couple of minutes later, and the citrus fades, but the sweetness does not.”

“The manufacturer refers to this as an astringent/balsamic fragrance, and I definitely agree, although astringent may be too harsh a word. It has a sharpness with the edges smoothed off a bit. Frankincense is listed as a note, but all I can pick up is a very slight resinous quality, no smokiness whatsoever. An hour or so in, I get a sort of musty, musky smell that is a little offputting, but not a dealbreaker.”

Then there is “Green, herbal, sweet but not cloyingly so, balsamic. This is a cologne strength, and the longevity is what you would expect, 2 to 3 hours. The price is good enough to make reapplication a non-issue. This is listed as a masculine on the manufacturer’s website, but I can definitely see this working on a woman as well.”

Finally, “This fragrance is very light: a blast of aromatic herbs (I feel rosemary) in the top, it disappears quickly melting with incense/vanilla, and you got a surprisingly soft fresh cologne, or better say its echo.”

There is, of course, the old stand-by created for Pope Pius, although he was anti-sensual, so his cologne reflects this. It is nowhere near as sensual as Benedict’s concoctions, and is more favoured in the monasteries.  It is labeled simply as “The Pope’s cologne”. It is an oldie but a goodie.

A marketing blurb is also not available, presumably to reflect the sense of humility associated with Pius. Users’ comments will have to suffice. For example, “I wear this to mass every Sunday. As others have already said, it has a very pleasant smell and I have been complimented on it on more than a few occasions.” Another satisfied customer notes that “It has a very pleasant scent, rather citrus-based. I actually know a few bishops who wear it!”

Father Kevin adds this simple note. “The fragrance is divine.” Another Fr. notes that: “It is clean and fresh and not over-whelming. Clean, lemony, leathery and violety.” One user adds an historical note. “I wear this cologne almost everyday. It’s pleasant enough, and, according to the maker [no, not THAT one!] it lacks the scents associated with eroticism and romantic love, commonly found in normal colognes. Allegedly, that is why Pope Pius had this made.”

The last word on “The Pope’s cologne” should be given to the un-named monk who said that “You might be amused that I bought the first bottle to give to my Spiritual Director, who is a bishop. The other monks could not work out where the fragrance came from, and it caused much comment in the Abbey (favourable)!!!” [Ed. – exclamation marks not added].

Users should be aware of cheap imitations and non-endorsed products (such as that shown above). They are not sold by reputable stockists, although they are freely available on-line and in the back-streets of Rome.

The new guy, “Frank”, makes much of his humble approach, foregoing luxury and mixing with the common people. It will be hard for people like Casoli and Hass to come up with a good mix for “Francisci”.

Something which evokes the smell of a Buenos Aires subway would hit the mark. Perhaps it could be mixed with something which is reminiscent of the smell of fear which was everywhere during the rule of Argentina by the generals. Finally, it could evoke the smell of the money necessary to deal with the paedophile priests’ scandal. Chemicals like putrescine, cadaverine, methyl mercaptan and furfuran (see Wikipedia) come readily to mind, perhaps in a banana-oil base.

Meanwhile, because of Benedict’s sudden resignation, many suppliers have been stuck with limited-value stock, so there should be a lot of bargains offered for “Benedictus”. Let’s hope “Georgie” secures a life-time supply in case it goes out of production when “Francisci” is released. 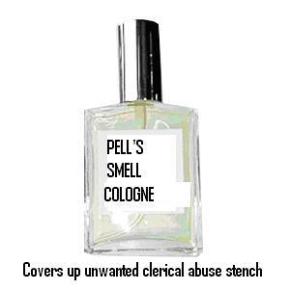 [Postscript: WARNING!!! The above product is not a real product. It can be readily identified by the absence of a cross on the label. If offered for sale, please contact the Sydney Archdiocese immediately.]

1 Response to The Pope’s Cologne: (Or: “Eau de Chastity”)