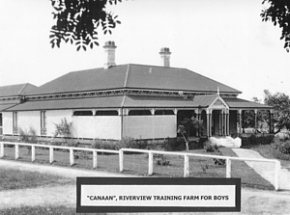 The Riverview Home run by the Salvation Army, until its license was revoked by the Queensland Government in 1977, is another of the institutions requiring a second look by the Royal Commission. All records were claimed to have been lost in the 1974 floods. The principal accused abuser, Captain Lawrence Wilson, was acquitted of all charges against him. However, the matter is far from settled in the minds of many.

It was ranked as the worst institution in Queensland by the 1998 Forde Inquiry. It was where many Indigenous “Stolen Generation” children were sent. The 1914 Annual Report of the Chief Protector of Aborigines notes than several boys were sent there (see reference below). The Home was also the destination of many of the “child migrants”.

On 7 December, 2010, at Old Parliament House, Canberra, in a closed event, the international leader of The Salvation Army, General Shaw Clifton, issued a national apology to former residents of Salvation Army Homes. The author was not invited to this function (nor to the national apology by Kevin Rudd and Malcolm Turnbull – too radical!).

Mr. Carlise says it took him 53 years to talk about his experiences at Riverview. His take on the whole apology thing is clear. “Sorry what does it mean?” he said. “It doesn’t mean a bloody thing to me. No apology and no amount of money in the whole wide world will get back what they took.”

The Salvation Army paid “compensation” to several victims, complete with the obligatory secrecy clause, and a signed waiver of future culpability by this organisation. Many were taken advantage of because of the difficulties associated with challenging the Salvation Army in court, coupled with their dire financial position. These clauses should be revoked, and claims raised again at the Royal Commission, while the matter of Captain Wilson must be revisited.