Another Alleged Aussie Paedo-Tourist Charged (Or: Popping Up Everywhere) 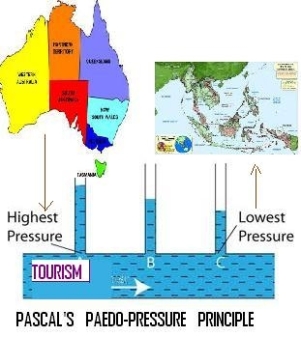 The Australian Royal Commission into Institutional Responses to Child Sexual Abuse will, if it achieves its aims, place considerable pressure on local child molesters. They will be looking to operate in an environment where there is less pressure from the law. Unfortunately, they are increasingly choosing to operate in less-developed countries, particularly in S.E. Asia.

There is a scientific principle which has been around for centuries, called Pascal’s principle. It means that pressure on one end of a tube must come out at the other end. It is the principle behind hydraulic systems. The “tube”, by analogy, is the tourist trade.

Earlier posts have tried to show how Australian paedophiles have moved to S.E. Asian “orphanages” now that the local children’s homes are no longer available. There have also been cases, such as the infamous McAlinden case (see previous postings) where priests have been transferred to places like the Philippines when it became too hot for them in Australia.

As the situation in Australia responds to the pressures from the Royal Commission, more and more “rank and file” child abusers will seek out countries where the pressures are not as great. Most Australians would agree that it would be wrong to export our problems in this regard to other, unsuspecting, countries, for a variety of reasons, including national pride.

The current case of Australian teacher, Hilton Munro, highlights the problem which is on the rise.

Munro was arrested in the Philippines by members of the PNP Regional Anti-Human Trafficking Task force headed by Insp. Sheryl Bautista together with the DSWD and International Justice Mission. He was charged with human trafficking and child abuse, relating to boys found at his hotel room in a tourist area in Cebu.

Munro had been in the habit of visiting the Philippines for three-week stays, every second month, since early 2011. This allowed him to take advantage of low visa requirements, which were intended to stimulate tourism. He had been under surveillance by authorities for some time, following a tip-off from locals.

He has worked in schools in Australia, New Zealand and China, and was intending to take up a position in the Philippines this year. He had just completed an appointment as head of the Zhuhai International School in Zhuhai City in China’s Guangdong province. The school’s web-site has removed all reference to him, following his arrest. He had previously worked at the prestigious Australian school, Scotch College.

At another Australian school, Munro was a teacher and boarding master. There, he was subject to charges of assaulting a 14-year old student, but was acquitted in 2003. It had been admitted by Munro that, after a night drinking, had “crashed” in the boy’s room, and left through the window at 7:00 AM the next day, but that he did not assault the boy. The jury found him guilty of aggravated burglary and not guilty of two counts of indecent assault.

During the early 2000s, he was heavily involved in boarding life at one prestigious Melbourne school, coaching hockey teams, refereeing matches, and “cooking up feasts” for groups on weekends away in the bush wilderness. In 1999 and 2000, he took groups of Year 7 students on weekends away.

Sheryl Bautista, deputy head of the Philippines’ anti-human trafficking task force, said that Munro paid the boys between the equivalent of $12 and $25 in Philippine pesos. “According to the rescued minors, the suspect would take nude photos of them … and have sexual relations with them,” Inspector Bautista said.

One boy’s mother remarked that “If my husband knew about this, I don’t know what he would do to that foreigner.” Note to the Australian government: This is not good foreign relations.