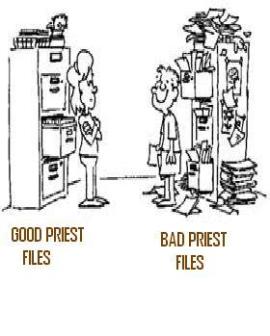 The Newcastle-Maitland diocese kept “good priest files” and “bad priest files”, according to Elizabeth Doyle, who was secretary to Bishops Clarke, Malone and Wright over the past 20 years. A quirk of the English language means that the reference could be to good files and bad files or good priests and bad priests. Ms. Doyle would choose the former interpretation.

In her early days, Ms. Doyle did not have the trust of Bishop Clarke. She told the enquiry that “she had no recourse to the files but believed they were all stored in the one cabinet upstairs in Bishop Clarke’s office.” Apparently, he took the distrust to extreme lengths. He never discussed such matters with her, typed some of his own letters, did his own filing and she never opened any letters addressed to him.

It must have been a classic “light duties” job for Ms. Doyle, with the Bishop doing most of the work. This cushy position apparently came to an end when Bishop Malone arrived and gave her charge of the filing cabinet. The good priest files where at the front, and the bad priest files were at the back. Not much to remember there.

Speaking of memory, Fr. Burston returned to the enquiry after several days of “stress leave” resulting from having to face the reality that victims tend to be a bit upset with people like him.

Previously, he had answered over 60 questions with the standard answer of “I can’t recall”, which he attributed to the effects of anesthetics from operations over the last decade. Fortunately, during the break, Fr. Burston found time to consult his family doctor about the condition, and the doctor duly issued him with a document for the enquiry.

It said nothing about Post-Operative Cognitive Decline (which is usually very short-lived and mostly affects short-term memory), but did say that he had trouble remembering names and doing cross-words. Counsel Assisting, naturally, disputed that these symptoms were responsible for not remembering anything about paedophile priests over the past twenty years.

As a victim’s mother so astoundingly clearly put it last week – “Officials have trouble remembering, but victims have trouble forgetting”.

Fr. Searle seems not to know of his memory problems. In earlier evidence, it was claimed that Fr. Searle witnessed a victim haranguing him about “priests doing filthy things to little boys”. Fr. Searle told the enquiry that he “had a very good recall of events”, but did not remember the victim saying that.

Searle also could not remember phoning the victim’s mother, despite her earlier evidence that he did indeed phone her and even repeated the “filthy things” quote. Clearly poor Fr. Searle is in denial about his memory issues. It is a good thing for him that he has now been excused from giving further evidence at the inquiry.

John Davoren, the former director of the church’s Professional Standards Office, and other church non-clerical officials will give evidence tomorrow, about their employers, in public. No, there’s no suggestion they would say only good things about their employers for fear of their jobs!

[Postscript: As an austerity measure, Pope Francis will not wear a gold ring – only a silver one. Cardinal Pell take note. Happy holidays.]