First Day (Or: As It Happened)

[Note: Today’s posting was delayed due to a power outage following a thunderstorm.] 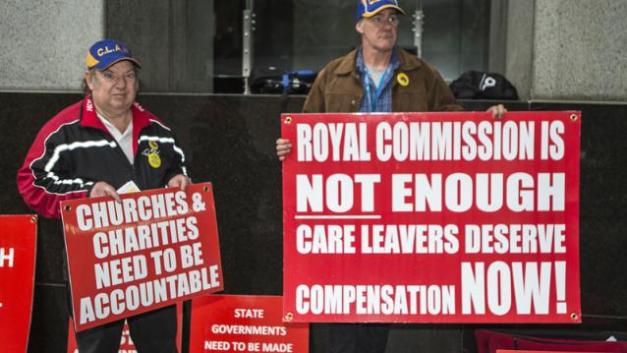 All six commissioners were present for the opening of public hearings for the Australian Royal Commission into institutional response to child sexual abuse, at its Sydney headquarters today. They heard evidence from Counsel Assisting, Gail “Snow White” Furness (see previous postings), a whistleblower, two victims and lawyers for the Scouts Australia organisation.

Formally, the hearing, which is expected to last up to two weeks, is to question why and how convicted paedophile and former scouts leader and Indigenous child protection official, Steven “Skip” Larkins, was able to get away with his crimes for so long, despite many warnings of his tendencies.

Larkins was so trusted that the Children’s Court even referred young people to him as the head of the foster care organisation. In 2010 he was caught out when he sent a text to one of those young people reading “Hey I love you but you should go home tonight so we don’t get caught.”

Many people have questioned the chief commissioner’s decision to begin with the Boy Scouts, rather than the Catholic Church. The Catholic Church will not be the subject of a hearing, in any form, until the end of the year. That hearing will not cover individual abuse cases by Catholic clergy, but rather will focus on the discredited “Towards Healing” process (see previous postings), which purportedly was established to help victims.

Mainstream media reports give some indication of the low-level cynicism which exists. When asked, “Now why is the commission focusing on this case of a scout leader first rather than say a case linked to the Catholic Church?” Australian Broadcasting Corporation journalist Emily Bourke replied that “I think it’s fair to say, because the commission can.”

The Melbourne Age’s reporter was more direct when he said that “In what is doubtless a careful political decision, none of the first three hearings involve the Catholic Church.”

In a worthy move towards more transparency, proceedings were live-streamed over the commission’s web-site, and aired in part by the Australian Broadcasting Corporation’s 24 hour news channel. Mr. McClellan himself showed that he may be starting to get the message when he admitted that “In my role as a judge I have been called upon to review many of the sentences imposed upon people convicted of the sexual abuse of children. But I readily acknowledge that until I began my work with the commission, I did not adequately appreciate the devastating and long-lasting affect which sexual abuse, however inflicted, can have on an individual’s life.”

McClellan also acknowledged that in residential institutions such as Children’s Homes and boarding schools, the commission had established that “sexual abuse is almost always accompanied by almost unbelievable levels of physical violence inflicted on the children by the adults who have responsibility for their welfare”.

The details of the Larkins case has been the subject of previous postings (see here: https://lewisblayse.net/2013/08/15/the-royal-commission-announces-public-hearings-or-who-let-this-happen/ and here: https://lewisblayse.net/2013/02/16/a-first-look-at-the-boy-scouts-or-when-youre-on-a-good-thing-stick-to-it/). The beginning of the end for Larkins occurred when he was observed giving sweets to children as an incentive to join the Scouts. It is of course truly amazing that he got away with what he did for so long, even under government scrutiny.

Giving evidence, Armand Hoitink, himself a former scout leader, told the hearing that he quit the organisation in protest at its treatment of Larkins, saying “It was all about protecting Scouts rather than protecting children”. He described how he became aware of allegations about Larkins’ behaviour towards children during the mid-1990s, and passed these reports on to his superiors.

Despite Larkins being transferred between various scout groups and ultimately issued with a formal warning, effective action was not taken, Mr Hoitink said, and he continued to have unsupervised access to children. Mr Hoitink’s evidence that another Scouts Australia official “told me I should not have contacted police because it would hurt the Scouts Association.” This was considered to be particularly sensitive, since Larkins was “part Aboriginal”, according to Hoitink.

This was later denied by lawyers for the person allegedly involved, the commission heard.

Hoitink said district and regional commissioner Des Hocking knew of allegations and rumours beyond the incident at a pool, including that Larkins was naked in the showers with scouts and had climbed into a sleeping bag with a young boy who had been swimming in cold water and claimed it was to warm the boy up. He described one incident when he asked Mr. Hocking what they were going to do about the allegations. Hoitink claims Mr. Hocking replied “nothing”.

The first victim witness, code-named AA, gave evidence via video link. His face was obscured. “I had a happy childhood,” he said. At eight he joined the Stockton cub scouts. At 12, he was sexually abused by Larkins. “I felt belittled, dirty, wrong, confused… I tried to forget about the incident.”

AA is still on medication for “depression and bipolar as a result of the incident. I still suffer sexual dysfunction.” It wasn’t until he was an adult that he told police about Larkins, after he saw him working at a youth centre. “I was flabbergasted. The person who had sexually abused me… had continued to work with children.”

High-powered lawyer, Greg James, a Queen’s Counsel, appeared for Scouts Australia. He disputed some minor details of Hoitink’s evidence, for example, the date on which he resigned from the organisation in protest. Scouts official, Mr. Metcalfe, who appeared before the hearing immediately after Hoitink, said he hadn’t “had one word from Armand (Hoitink) at all in any way shape or form”.

Metcalfe said he was unaware at the time of allegations that Larkins had climbed into a sleeping bag with a young boy who had been in cold water. He said such action from a scout leader was known to be “not on, definitely a no-no”.

NSW police have been drawn into the matter as a result of failures concerning another victim, known as AC. About 12 months after his mother informed the police of her son’s abuse by Larkins, one of the investigating officers, senior constable Pamela Amloh, incorrectly told another officer that the Department of Public Prosecutions (DPP) had advised that a prosecution was unlikely to go ahead. This was incorrect information.

Indeed, a few days later, the DPP wrote to Senior Constable Turney recommending that the prosecution go ahead. The commission heard that six months later AC’s mother told police that her son no longer wanted to go ahead with the prosecution, and it was likely this was because of “delay and the initial misinformation”.

Senior Constable Amloh is due to give evidence on Tuesday or Wednesday. Hearings on the Larkins matter will run to the end of September

Hearings for the rest of the year will be on NSW matters. In October, the inquiry will examine the response of the YMCA and police to allegations Jonathan Lord sexually abused children in the organization’s care. In November, it will examine the handling of allegations of child sexual abuse in the North Coast Children’s Home by the Anglican Diocese of Grafton in 2006 and 2007 (see previous posting)

A final public hearing in December will hear evidence about the “establishment, operation and review of the Towards Healing process by the Catholic Church”. Ms Furness also told the hearing that an orphanage, another Catholic Church institution and the Salvation Army will be the subjects of hearings next year.

[Postscript: Guides Australia has issued a press release distancing itself from Scouts Australia. It reads, in part, that “This Media Statement should assist to clarify that Girl Guides is eager to co-operate with the Royal Commission and that currently there are no known incidents of child sexual abuse within Girl Guides and that Girl Guides is a separate organisation from Scouts. On 4 April 2013, Girl Guides was mentioned, along with Scouts and Little Athletics, in the opening address of Senior Counsel Assisting the Royal Commission. Subsequently, in media articles there was a reference to Girl Guides and a reader may have inferred from those media articles that there were incidences of child sexual abuse within Girl Guides.

Girl Guides reiterates that it informed the Commission that it was not aware of any incidents of child abuse and that position has not changed.”]