The Bishop Who Upstaged Pell (Or: My Mansion’s Bigger Than Yours)

Poor George Pell, Australia’s only Catholic Cardinal, has lost his crown for the most opulent residence, “Domus Australia” (see previous posting), to Germany’s Tebartz-van Elst. To add insult to injury, Tebartz-van Elst is a mere bishop.

Pell’s place, “Domus Australia, cost a mere $30 million, while the German bishop (known fondly in Germany as the “Bishop of Bling”), spent $42 million on his place. Indeed, it is even rumoured that the final cost may exceed $50 million. While Pell’s place boasts an in-house restaurant, bar etc., it cannot match some of the German place’s attractions.

The Bishop of Bling’s place has a 63-square-metre dining room, for example. It also has a $20,000 bathtub and a $34,000 conference table. There are plans for an 800-square foot fitness center. The landscaping cost a mere $1,100,000. His private chapel cost $4 million, and that was just for renovations, although, to be fair to Pell, Pell’s chapel probably cost more.

The Bishop of Bling showed his brilliance when it was revealed that the renovations started by his predecessor would have come in at a paltry $7 million. Only a truly brilliant mind could stretch that out to over $40 million in one hit. The architect, Herr Frielinghaus, said that the bishop had “put no limits on his spending.” Just the sort of client every architect dreams of (or prays for!). 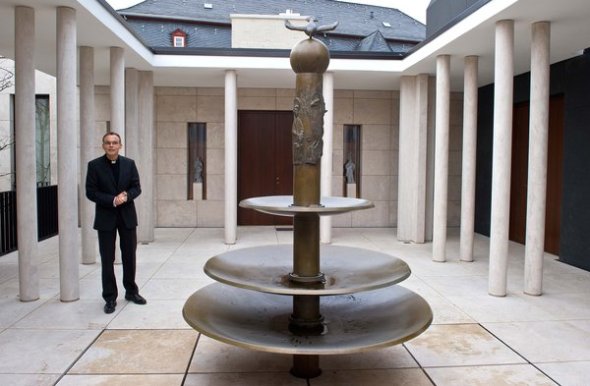 Image: The Bishop with his opulence trophy

Again, to be fair to Pell, it was easier for the German bishop to get his hands on the money. In Germany, Catholics pay a special tax which the government gives to the church. Perhaps Pell could have a quiet word with our Treasurer, Joe Hockey who is a good mate, about similar arrangements in Australia. If that fails, perhaps another quiet word in Prime Minister Abbott’s ear would do the trick. Either way, look out Mr. “Bling”, Pell may be able to regain his ostentatiousness title with, perhaps, a really, really luxurious lounge. It would all be in a good cause (Pell’s ego).

Tebartz-van Elst is clearly on the rise. He became Germany’s youngest bishop when he was installed by Pope Benedict in January 2008. He has described himself as a child who preferred to read rather than help on his family’s farm. Pell likes to “read” too (see previous posting), even going on long holidays from his duties as chief official of the Australian Catholic church, like fronting abuse enquiries, to do so.

Unfortunately, the new guy, Francis, has had to suspend the German bishop for three months to appease all of those German atheists, and there are many, who thought some of the expenditure was a little over the top. It also didn’t look too good for Francis’ main PR thrust of being a less than worldly pontiff, unlike the previous guy with his red Prada shoes. 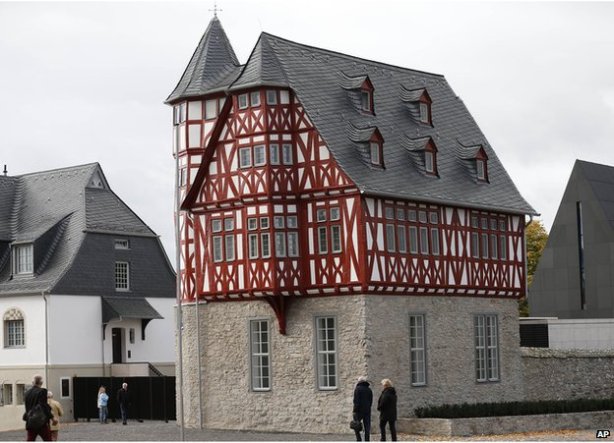 Frankie has repeatedly called for the Catholic Church and its faithful to rid themselves of earthly concerns like his name-sake, St Francis of Assisi, warning that “worldliness is a murderer because it kills souls, kills people, kills the Church.” He has said that he wants “a poor church for the poor” and has urged church officials to live humbly. Probably doesn’t apply to officials like Pell and “Bling” though since they have not taken a vow of poverty.

Still, “Bling” had to put on a show for the sake of the boss’ image. In a video released last month, Tebartz-van Elst acknowledged many had been hurt by decisions he had made “to the best of my knowledge and in good conscience” but which had been misconstrued. “To those I have hurt or disappointed, I beg for forgiveness and indulgence,” Tebartz-van Elst said. Meanwhile, the search goes on for a builder to construct the 800-square foot fitness center. 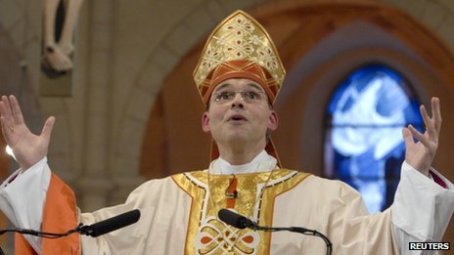 Now, to some, it might not seem important that Australia has lost the extravagance crown to a German, but it important to let the world know that Australia is not just about being the best in sports. We can spend wildly with the best of them. So, come on all you people out there, give generously to the “lounge fund” for “Domus Australia” and get our rightful title back Down Under, where it belongs. Only $12 million is needed!