What Tommy Said (Or: Saving The Furniture) 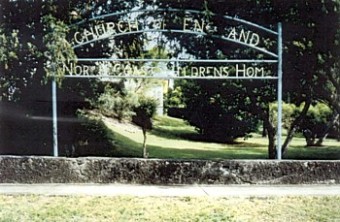 Abuses at the North Coast Children’s Home have been detailed to the third “case study” hearing of the Australian Royal Commission into Institutional Responses to Child Sexual Abuse in Sydney this week. The institution was run by the Anglican Church (known elsewhere as the Episcopalian Church or the Church of England), although their officials have denied this, claiming it was, in fact, run by a committee, and therefore the church was not morally or legally responsible for what happened there.

The audacity of the church’s attempts to deny responsibility can be shown by the inclusion of the sign on the main gate to the Home (pictured above) clearly identifying the “Church of England” (as the Anglican Church was then known). The above photo was tended to the enquiry as evidence.

An insight into Phillip Aspinall’s (see previous posting) church’s duplicity was given by the testimony, today, of lawyer, Simon Harrison, who represented some of the victims. He testified that the way the Anglican Church dealt with the claims was the most “scurrilous and mean-minded” he has ever seen. He said that a lawyer for the Grafton diocese, Peter Roland, claimed there were limited funds for Mr Harrison’s clients.

“He was pleading poverty, but I have seen that so many times with churches I just took it as a matter of course. Out of all the claims I’ve dealt with over quite a few years, the way this was dealt with by the church was perhaps the most scurrilous and mean-minded attitude I’d ever come across quite frankly.” When Mr Harrison represented a former resident, known only as CA, who sought compensation after the group settlement had been reached in 2007, he was told the North Coast Children’s Home file was closed.

The person who initiated the revelation of the crimes committed by Anglican Church officials and staff was “Tommy” Campion (see previous postings). Richard “Tommy” Campion is a successful press photographer who has photographed models, celebrities and rock stars and has just welcomed his grandson into the world. He is a former recipient of an Australian news photographer of the year award.

”I decided, after having dreams about children being beaten at the end of their beds, that I had to do something,” Mr Campion said.

As is so often the case for the first person to come forward regarding a specific Children’s Home, Mr. Campion soon found that he was dealing with an organisation which cared nothing about the victims, but cared a lot about its “brand” image, and the protection of its wealth. It was not long before the mask of the “caring” churchman gave way to the face of the cynical businessman protecting his investments.

Mr. Campion used the only power he had – that of embarrassment – to force Archbishop Aspinall to meet with him. He held a long, lonely vigil, with a sign, on the steps of Aspinall’s grand cathedral in Brisbane. As Mr. Campion noted, this was a humiliating thing to have to do. Eventually, the high and mighty churchman agreed to a short meeting with the lowly victim.

After an initial, apparently positive response to a five page letter he sent, detailing the abuses he experienced, things soon changed. This was because he contacted many other former residents of the Home, who then also applied for assistance from the Anglican Church. The 40 or so victims were paid an average of $10,000, after legal costs, for the most horrific abuses. [Mr. Campion and his sister have refused the offers from the Anglican Church as being grossly inadequate. This author has done the same with his offer of $4,000.] The church soon realized that there were even more victims, and that costs would eventually soar.

The abuses related by Mr. Campion and two other witness not identified by name, are as appalling as one could ever encounter. Another four witnesses are due to give evidence later in the hearing. The details are not listed here, for sensitivity purposes, but the “read more here” section below, does list them fully. [For what it is worth, this author can vouch for the veracity of the details, having either experienced, or witnessed, almost all of them during stays in five different Children’s Homes in Queensland state, as well as having heard the accounts of over 200 other former residents of Children’s Homes.]

The first block Mr. Campion encountered was the ruse by the church to avoid any potential for civil action by, as indicated above, denying it actually operated the Home. This meant that victims had to rely on the whim of the church for compensation. This tactic is widespread when the issue of victims’ compensation arises (see previous postings, e.g. “Ellis Defence”.)

The tightening of the purse strings by the Anglican Church was covered by the evidence, today, to the Royal Commission by a former staff member, Anne Hywood. She said that, after the initial payments, no more were made because the church was “struggling with debts elsewhere” Specifically, there was a $7 million debt incurred by one of the church’s private schools. She related former Bishop Keith Slater (who resigned this year over handling of the case, and this week was replaced by the church’s first female bishop) telling her that “Well, we are in the middle of a financial crisis” and that “The diocese is not legally liable.” The new victims had “missed the boat”, she felt Slater was saying. This made her angry.

She reported that “The diocese’s response… has been overly-legalistic, has not been focused on pastoral care and on-going support of survivors and has incorporated processes and responses that have incurred additional damage to individuals.” She was also concerned that victims’ letters had not even been replied to after a period of 18 months. Clearly, the good Bishop was hoping the whole thing would just go away, and made this obvious to Ms. Hywood, his employee.

Mr. Campion would have known how heartless the people he was dealing with were, when he encountered Pat Comben, the local priest responsible for administration. Mr. Comben, in his earlier career, was a politician, rising to the rank of Education Minister in the Goss Labor Government, in Queensland State. Mr. Comben was one of those who dropped the guise of concern for the victims when it became apparent that it was going to cost his church a lot of money.

“Tommy” told the enquiry of his anger when a press release, issued by Rev Comben around the time of the claims, said “some of the matters complained of might have been standard practice in Australia some decades ago”. He purportedly commented that the victims shouldn’t complain because “at least they had a roof over their heads.”  Indeed, Comben went the whole way in denial, by questioning the truth of the allegations, telling a newspaper the victims had ”substantial hurdles to overcome” to prove their case and described the home as ”a great north coast community facility”.

Mr. Comben has not denied the allegations, and will appear before the enquiry in due course to explain himself, under oath.

TOMORROW: What CA and CK said