Who Knew What When? (Or: Your Conscience Is Showing)

The Australian Royal Commission into Institutional Responses to Child Sexual Abuse has completed its first week of a hearing into the controversial “Towards Healing” process, used by the Catholic Church to deal with allegations of abuse against it.

The early part of the week covered events surrounding the abuse of Mrs. Joan Isaacs by priest, Frank Derriman. The case occurred in the Brisbane Archdiocese, in Queensland State. The main points which arose from that case concerned the inadequacies of the “Towards Healing” process, and problems associated with the involvement of church lawyers and insurance officials, in what was billed as a primarily pastoral process.

The final half has enquired into events surrounding the abuse of Jennifer Ingham by priest Paul Rex Brown. This case occurred in the Lismore diocese in New South Wales State. Lismore was also the location of the North Coast Children’s Home, operated by the Anglican Church, which was the case study for the preceding hearings of the Commission (see previous postings).

The Commission has heard apologies from the Brisbane Archbishop, Mark Coleridge, and the Lismore Bishop, Geoffrey Jarrett. Unlike the Mrs. Isaacs case, the Ms. Ingham case was marked by some positive comments on the process by the victim, particularly concerning the role of Patrick Mullins and Geoffrey Jarrett.

The central feature of the case of Ms. Ingham has been the matter of when the church knew of the abuse allegations against Brown. Priest, Francis Mulcahy, denied he had been told by Ms. Ingham, in 1990, about the abuse by Fr. Brown, and even denied having any memory of her, despite a life-long close association with her father.

Mulcahy told the enquiry that Brown was an alcoholic and that “That’s why he was dismissed from his post as parish priest for Tweed Heads. He was never, ever accused of sexual abuse.” The only conviction against Brown, before his death in 2005, related to possession of child pornography. However, an internal church document tendered as evidence, and described as a “document prepared providing the reasons for the removal of Father Brown as a parish priest”, mentioned allegations of abuse.

The documents showed that Brown had been involved in allegations of abuse against two boys in the 1980s. It was revealed that there had been at least 6 possible victims, allegedly known to the church.

Ms. Ingham also stated she told a parish priest in the Brisbane suburb of Mt. Gravatt, and priest Michael McKiernan, both in 1993. She said McKiernan told her to “stop blaming the church and go away.” No action was taken after these complaints. Only her approach to “Towards Healing” last year started to get results.

Today, the commission cited documents, and heard evidence that the church knew about Fr. Brown’s offending, as early as 1985.

A former claims manager at Catholic Church Insurance, Emma Fenby, told the enquiry that a review of Brown’s file demonstrated that the knowledge about Brown was available as far back as March 1985. There had been a previous insurance claim against Brown.

Much of the evidence for the church and insurers knowledge of the Brown case came from Deacon Christopher Wallace, a former police officer. It was he who e-mailed Emma Fenby about the previous claim against Brown, which read in part that Brown “had form in this area”. He revealed that there had been two other cases concerning Brown in the “Towards Healing” process before Ms. Ingham’s one in 2012.

The first one, in 2002, was from a woman. Mr. Wallace said that “The allegation was, (as a schoolchild in 1959), she walked in on Fr Brown in the act of sexually interfering with a child in the sacristy of the cathedral…She alleged that he also abused her, touched her, and she then fled to near the bell tower to escape, reported the matter to a nun, and got a belting for casting aspersions on the priest.” The second case referred to by Mr. Wallace, was from a male victim in 2007.

[Wallace later wrote to Mrs. Ingham saying he believed her account, and that “What he did to you was wrong, and what wasn’t done by the church was wrong,” Mr. Wallace is doing a lot to restore some of the reputation of the Lismore parish, and the church in general. More Wallaces are sorely needed.]

Fr Brown denied the allegations when questioned in 2002.

Earlier, Mrs. Mary Bernadette Rogers had explained the chaotic nature of the “Towards Healing” process, and her own lack of expertise in some ways, and absence of consultation between her and her counter-parts in other States. She referred to the “fluid nature” of the process and that “I think the thing about Towards Healing is that it doesn’t have rules.  …Each person needs to be dealt with in their own way.”

[Ms. Rogers has today revealed that she is leaving her position, after less than a year, next month.]

The latter stages of the week’s hearings descended into a bit of naval gazing by the lawyers about the ethics of the handling the “Towards Healing” process. Some, who would normally think nothing of going in hard in most cases, reputedly privately indicated to certain people, off the record, that they would never stoop as low as some of the people involved in “Towards Healing” with the obviously damaged victims, whatever they were being paid.

Commission chair, Peter McClellan, described the negotiation process as a “common law fight in the trenches”. Emma Fenby, of the Catholic Church Insurance, said she was advised to only offer Ms. Ingham $30,000 but ignored the advice and offered almost 10 times that amount. She commented, at this point, that “I didn’t think it was very dignified or respectful to horse-trade in facilitation.”

Outside the hearing, Ms. Ingham’s lawyer, Peter Kelso, told AAP that the “low-balling approach showed the church’s willingness to take advantage of victims’ desperation. …The Catholic Church has treated the Towards Healing process as an excuse to offer small financial settlements to people, because they know that they have no other forum to go to, in which to get a fair and reasonable settlement.”

No doubt, the boundaries of professional versus moral ethics will be a hot topic of debate over “drinkies” tonight in more than one legal Bar and Grill, between learned colleagues.

[Postscript: The author has received an invitation to enter a request to be heard at the next Commission hearing, into his old Children’s Home, “Alkira”, which was run by the Salvation Army, and has sent in the appropriate form and submission. The commission is yet to reply if the request will be acceded to.]

Pro-Catholic Propaganda Feature: In the interests of a “fair and balanced” blog, the following photo from the Vatican PR Unit is re-posted. 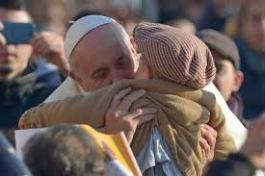 1 Response to Who Knew What When? (Or: Your Conscience Is Showing)