What The Next Hearing Is About (Or: Nothing Is Forever)

The Salvation Army ran an orphanage in the suburb of Woolton in the U.K. city of Liverpool, from 1936 to 2005. It has been listed by www.abuselaw.co.uk as having complaints of child sexual abuse.

One victim’s statement alleges that he was in this Children’s Home “from 1987 – 1992. I witnessed abuse, and was victim to it also. It was physical, sexual, mental and psychological abuse. My sister was abused, and she took the abuser to court, yet he got away with it, it was brushed under the carpet. She was moved to another Home, and the abuser stayed, allowing him to carry on abusing more victims, including myself. That is my story.”

There was a boy who lived around the corner from the Home. As a child in the 1950s, he squeezed through the Home’s tall, wrought iron gates and played on the grounds with some of the orphans who lived there. He felt a kinship with them after he was abandoned by his father and sent by his mother to live with his Aunt. He played with childhood friends in the trees behind the orphanage when he was a boy, and always attended an annual fete there, with his Aunt.

When that grown-up boy died, he left a lot of money to the Home in his will. When, in 1984, the Home was in danger of closing, his widow gave the Salvation Army a further $70,000 to keep it open. That boy wrote a song about the Home when he grew up and formed a pop band.

The boy was John Lennon, the band was the “Beatles” and the song was “Strawberry Fields Forever”.

[Postscript: The internet is full of interpretations of the lyrics of “Strawberry Fields Forever”, but none match with what former Children’s Homes residents would identify with, for the lines: “Living is easy with eyes closed” and “No one I think is in my tree”.] 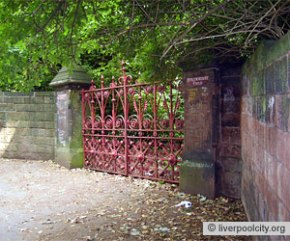 Image: Sean, eight-year old son of the late John Lennon, stands close to his mother Yoko Ono at the Strawberry Fields Gates on Jan. 24, 1984 in England that Lennon made world famous in a recording with the Beatles. Sean and his mother were making an emotional visit to the Beatles’ hometown of Liverpool. From left are: Salvation Army Officer Brig. Bramwell-Darbyshire, Yoko Ono, Sean and Salvation Army Captain Botting. Date: 24/01/1984

Image: The Fab Four with Anglican Home children at Easter in the early 1960s

TOMORROW: Why Wally should be heard

1 Response to What The Next Hearing Is About (Or: Nothing Is Forever)