The Salvation Army Position On Sexuality (Or: They Don’t Just Shoot Horses) 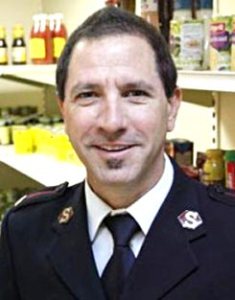 Last year an Australian Salvation Army officer created quite a stir during a radio interview on the organization’s attitude towards non-heterosexuals. The officer involved, “Major” Andrew Craibe was the Media Director for the salvos in the states of Tasmania, Victoria, South Australia and Western Australia, so he would have been well aware of the potential media fall-out from his on-air comments.

Currently, the Salvation Army is waging a concerted PR war to “prove” it is not in any way discriminatory towards non-heterosexuals, and does appear to be winning over many activists in this field. While the U.S. has clamped down on discrimination by faith-based organisations, in Australia they are allowed many exemptions still, at both State and Federal levels.

The radio show was hosted by journalist Serena Ryan, to discuss a recent call by LGBTQ parents for a boycott of the nonprofit for its anti-gay policies and beliefs. Ryan questioned Craibe about the Salvation Army’s policies in this area. What Craibe said reverberated around the world and set their PR campaign back a hell of a lot.

Ryan quoted from the “Salvationist Handbook of Doctrine”, the manual used to train Salvation Army “soldiers” and members. Several chapters refer to the sin of homosexuality, including a section that cites the bible passage from Romans 1:18-32, which includes an admonition that homosexuals “deserved to die”.

Here’s how the discussion went:

Ryan: According to the Salvation Army gay parents deserve death. How do you respond to that, as part of your doctrine?

Craibe: Well, that’s a part of our belief system.

Ryan: So they should die.

Craibe: You know, we have an alignment to the Scriptures, but that’s our belief.

Ryan: Wow! So we should die?

Ryan: You’re proposing in your doctrine that because these parents are gay, that they must die.

Craibe: Well, well, because that is part of our Christian doctrine

Ryan: But how is that Christian? Shouldn’t it be about love?

Craibe: Well, the love that we would show is about that: consideration for all human beings to come to know salvation

Media sources around the world ran with the headline of, basically, “Salvos say gays should be killed.”

Firstly, Craibe was sailing close to the wind, under Australian law. It is a serious crime to call for the death of any group of people, under any circumstances. Despite petitions, Craibe was not charged under the laws of any state or territory.

Damage control was urgently needed. “Major” Harmer, PR and Communications Secretary, issued an unconditional apology, describing Craibe’s comments as a “miscommunication”. However, to date, there appears to be no record of Craibe apologizing. Further, there is no record of Craibe being dismissed from his position, or the Salvation Army itself.

John Becker, Director of Communications for Truth Wins Out said: “The Salvation Army was wise to distance itself from ‘Major’ Craibe’s disturbing remarks and apologize promptly for them. However, it’s clear from ‘Major’ Harmer’s statement that the group still believes ‘homosexual behavior’ is sinful. The Salvation Army and the LGBT community cannot possibly have a healthy relationship while these offensive beliefs remain in place.”

Wayne Besen, TWO’s Executive Director, added: “In ‘Major’ Harmer’s statement, the Salvation Army promises to treat each person with dignity, respect, and non-discrimination,. But this pledge means very little unless it is accompanied by a reversal of the Salvation Army’s discriminatory, anti-gay teachings.”

In the U.S., Salvation Army officials say they don’t ask clients about their sexuality, though they acknowledge that some isolated incidents of discrimination may have occurred Last year, the Salvation Army USA removed from its website a controversial position statement on homosexuality that suggested gay Christians “embrace celibacy as a way of life.” [This is what Craibe was still saying, above, in relation to Salvation Army members.]

The Salvation Army PR people in Australia will be diverted from this issue for a while by the up-coming Royal Commission hearings into Institutional Responses to Child Sexual Abuse, which will feature four of its Boys’ Homes where sexual abuses are alleged to have occurred.

[Postscript: The new PR man is Bruce Redman Ph.D., who has taught PR and journalism at one of Australia’s premium universities, the University of Queensland. Presumably, he will be a little savvier about public reaction to unwise comments than did his predecessor, Craibe.]