The Salvation Army – Olympics Connection (Or: Our Business Is Charity) 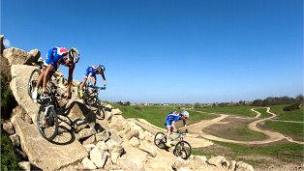 The Salvation Army owns the 900 acre Hadleigh Farm, which is used to provide employment training and life skills for youth under various government programs. Somehow, Telfer convinced Olympics officials to make the farm the venue for the mountain bike events, over several other applicants. Normally, Olympic events sites remain in the hands of government bodies of one form or another.

In this case, the Salvation Army acquired a $1.2 million facility, at taxpayer expense, which it gets to keep, and make money from. The main income from the farm prior to the Olympics was selling the malt used to manufacture the popular confectionary, “Maltesers”.

The farm had also run a shop, café and tea-room before, relying on local tourism. As part of the deal, the government paid for highway and local road up-grades to Hadleigh Farm, enabling it, in future, to handle larger numbers of tourists.

The Olympics event provided quite an opportunity for revenue-raising, naturally, but it also gave an opportunity to push their ideology. For example, the site was the only alcohol-free venue of its type, to keep the Salvation Army happy. (Coca-Cola would also have been happy at the lack of competition from alcohol companies in the summer heat).

The organization’s PR wing boasted that “A major boost to the Army’s publicity was the live broadcast of BBC’s Sunday Breakfast programme from the training centre. There were seven interviews with members of The Salvation Army.”

Salvation Army members and volunteers “greeted” visitors, engaging them in “conversation” and handed out copies of the organisations publication, “War Cry”. Signs were erected featuring the logos of both the Salvation Army and the Olympics together. Other organisations, like McDonald’s and Coca-Cola pay a fortune for this privilege.

Post-Olympics deals are also being done by the entrepreneurial Mr. Telfer. Plans are in place to maintain the farm as a mountain bike venue, with the London Olympics’ committee developing new tracks after the Games. This will enable the average person to cope with the 3 mile long riding track.

It is also looking at putting in a new tea room at that end of the farm, which is around a mile away from the existing tea room, and there is the possibility of a family center. There will also be a new restaurant, bicycle store, shower facilities etc. for paying visitors.

Telfer told media sources that “We are really encouraging families to come here. All the research we have done suggests there is a vast amount of people who would love to come along and do mountain biking.” And spend money.

The local county is chipping in too. Essex County Council will contribute neighbouring land from Hadleigh Country Park and there will be redevelopment of dilapidated buildings and the formation of a new visitor hub, all-age, all-skill level cycling trails, cycle hire and a number of recreation trails providing opportunities for orienteering, cross-country running, sculptured landscaping and wildlife habitat enhancement.

Telfer added that “There will be new mission and fundraising opportunities too. A new building will include a restaurant staffed by training centre trainees,” as well as more unpaid volunteers.

The Salvation Army appears to be rapidly learning the finer points of business from its “partner” organisations such as McDonalds (see previous posting). While it would claim that this all funds its charity work, there does appear to be a distinct move towards more of a business culture, rather than a charity culture, within the organisation.

Perhaps, this is why the Salvation Army has responded to claims of child sexual abuse in its Children’s Homes in Australia with the standard PR practices of a business caught out doing something unethical using the management technique of “narrative reconstruction.” This is why this blog has run the recent postings on the Salvation Army as a business enterprise, which is more concerned with re-investing to grow the business, rather than paying “dividends” (i.e. giving to the poor).

[Postscript: The Salvation Army will be able to be involved with the Sochi Winter Olympics in Russia. It was originally banned as a “quasi-military” organisation by the Russian government, but won a case in the European Human Rights Court, in 2006, to remain in Russia.]

Image: Hadleigh Farm during the Olympics

Image: Promotion for the tea-room (feeding the rich, served by the poor?)

2 Responses to The Salvation Army – Olympics Connection (Or: Our Business Is Charity)