A First Look At The Salvation Army’s Employment Practices (Or: What Would William Wilberforce Say?)

There is one aspect of the Salvation Army Children’s Homes which will not be covered at the up-coming hearings into the Home by the Australian royal commission into institutional responses to child sexual abuse.

That issue is child slave labour. The Salvation Army in the past has acknowledged that children did unpaid work on farms, laundries, etc. and that the Salvation Army at times was directly paid for the children’s work (see previous postings).

Today’s posting relates to what is termed “Workfare” in the U.K. Under this government program, which is like the “Work for the Dole” program in Australia, long term unemployed and disability pensioners are forced to do unpaid work or risk losing all or part of their welfare benefits. They must work for 30 hours per week for six months.

The theory behind the program is that the forced labour will give them work skills, and therefore increase their employment chances. One of the principal participants of the scheme is the Salvation Army. The very sort of people it claims to want to help, are being made to work in their thrift shops for free. They are NOT unpaid volunteers.

Many other organisations have refused to participate in the workfare program because of either adverse public reaction, or a belief that it constitutes forced labour. These include: Red Cross, Oxfam, Single Homeless Project, Pizza Hut, Blue Cross, Burger King, Holiday Inn, and The Children’s Society.

Volunteers are becoming hard to find for the Salvation Army. For example, in the U.S. it has taken to paying people minimum wage to act as “bell-ringers” for their “red kettle” fundraising venture at Christmas.

A cheaper alternative has been used in the past in the U.S. where former Governor Pataki of New York State once ruled that welfare recipients could work off a new job requirement through community service including bell-ringing for the Salvation Army. Staffing Salvation Army donation kettles is one job that would count toward the rule requiring 20 hours of work a week that a federal welfare law imposed on food stamp recipients between 18 and 50 years of age.

As Rachel Leon of the Hunger Action Network of New York State said, “What does ringing a bell prepare you to do?”

U.K. Workfare unpaid worker, Callum Kenny, 19, echoed similar sentiments about his time at a Salvation Army thrift shop, saying that “The position was unpaid and it is not like it was somewhere that had any possibility of leading to a permanent paid position. All I was doing was putting tags on clothes. I was meant to be doing the tills and steam cleaning clothes but they weren’t training me.”

“I don’t feel I really learned anything and I don’t necessarily think I will even put it on my CV. While I was working there, two other people were doing the scheme at the same time. One of them had volunteered because he wanted to get recent experience of driving delivery vans but he was doing the same as me. To me the system just doesn’t work.”

The Salvation Army’s involvement in the scheme has attracted widespread criticism in the U.K. A demonstration was held at the International Salvation Army’s plush headquarters in London. It was reported (see read more here, below) that “employees of the charity manhandled anti-workfare protesters, tried to seize personal property and then physically prevented them from leaving the building.”

Another protest occurred at the Salvation Army’s U.K. Elephant & Castle offices, Despite not only having been told to visit by the organization’s International Headquarters, and allowed onto the premises, security staff then began accusing people of trespass and demanding that people should give them their mobile phones and cameras. Police were called.

No allowances have been made by the government for people who may have problems with being made to work for the Salvation Army (e.g., because of its attitude to gays, or because they had been violently abused by Salvation Army officers in Children’s Homes, etc.). The Salvation Army responds to this kind of criticism by claiming that “We would be extremely concerned if a person turned down a mandatory work activity placement with The Salvation Army, because of any doubts they had about the support and welcome they will receive from us.”

From Monday 3 December 2013, the U.N. International Day for Persons with Disabilities, the U.K. government is expanding Workfare to force more than 300,000 sick and disabled people onto the program for an unspecified length of time. People with mental health issues, cancer, heart problems, or any number of debilitating issues and who have been deemed unfit to work, could be forced to work in their local Salvation Army thrift shop or lose up to 70% of their benefit, leaving them with just $42 a week to survive on, it has been reported.

The program is taking jobs away from normal workers. One woman, who was made to mop floors at a charity-run hospital, said that the other, paid, workers very much resented her presence there, fearing they would lose their jobs eventually.

There is a petition organized on the change.org site (http://www.change.org/petitions/salvation-army-drop-mwa) which reads: “To Clive Adams, Territorial Commander for The Salvation Army in the UK with the Republic of Ireland. We the undersigned call on the Salvation Army to withdraw from the government ‘workfare’ style Mandatory Work Activity Placement scheme. We believe it is immoral and very close to slavery by coercing the unemployed to do work for no extra money under the threat of loss of benefits should they fail to complete their placement.”

Perhaps the last word should be given to Liz Ely in her open letter to the Salvation Army: “I am asking you to consider the work programme from a Christian perspective, and ask your self what Jesus’ approach might be in this situation. Would Jesus support people like Emma Harrison, founder of A4E, an organisation that forces the unemployed to volunteer in your shops? Would he be happy that she earns millions of pounds from forcing others to work for free?”

The official liaison person for the Salvation Army with the royal commission is “major” Peter Farthing, who is the organization’s personnel head (Eastern Territory). 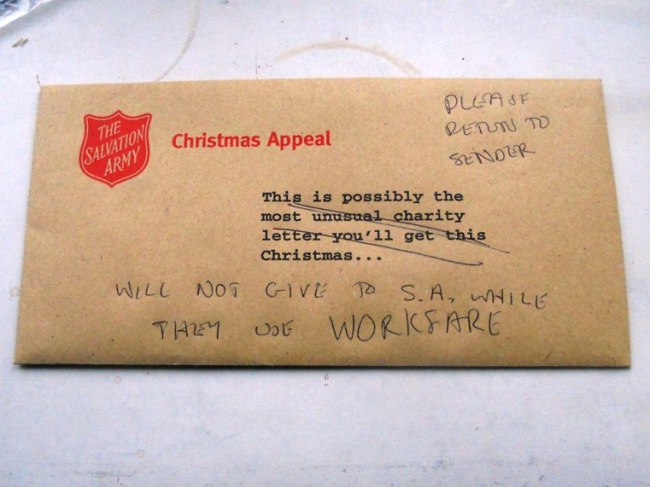 1 Response to A First Look At The Salvation Army’s Employment Practices (Or: What Would William Wilberforce Say?)