The Salvation Army has a “Z” on its uniforms in Poland rather than the usual “S”. A Salvation Army web-site reports that “Local head, Patrick Granat, in 1998, was transferred to Germany to build a Salvation Army presence in the eastern part of the country near the Polish border. Then, one day, he decided to take a trip over that border.”

Now, Poland is part of the Salvation Army’s German Territory. And not a single shot was fired.

The Salvation Army reports that the move into Poland allows for Polish people to allow the government to collect a special tax (usually 1%) from those who agree, as is the case in Germany.  As elsewhere, the Salvation Army in Poland benefits from all taxpayers’ money. In 2012, the government gave it 50,000 Zlotys ($14,925 US) for its children’s center. This contract will increase in 2013, and is authorized for the next three years.

Initially, former Soviet bloc countries were suspicious of uniformed Salvos. In 2001, Russia went so far as to ban them as a “paramilitary organization”. The Salvos took Russia to the European Court of Human Rights and won, but for years Russia still opposed their presence in that country. However, under Putin, they have now been given free reign. Perhaps it was because Putin and the Salvation Army have a common homophobic stance.

The web is full of claims of Salvation Army cooperation with, or tolerance of, dictatorial regimes. Their founder, Booth, once described himself as a dictator. These web claims are of dubious authority; however, the following extract from the Salvation Army’s official historical society (see reference below) contains many allusions to, and excuses for, their actions during the rise of Hitler.

“Let us say straight away that at no time did the International Salvation Army endorse the Nazi Regime. What limited documentation survives indicates that International Headquarters treated the NSDAP with tolerance towards a necessary authority within which to work. Struggling to cope in 1934 – 5 with the still visible effects of the world-wide Great Depression, Hitler seemed able to bring at least stability and to many people, hope.

The Salvation Army’s continuance in socio-religious work and as a moderating/stabilizing influence in Germany depended on working with the government in power. Pictures remain of Salvation Army flags being carried alongside the swastika in several countries. What is most interesting is why the Salvation Army was allowed to continue after other Protestant Churches were forced to close.

During the 1920s and early 1930s on his way to power, Hitler used many places for his speeches and there is a photograph apparently showing him inside a large hall with a Salvation Army emblem on the wall. Further evidence will be forthcoming that once in control; Hitler realized that as the social work programme he would introduce needed support, what better organisation to help than the Salvation Army.

Continuing with its pragmatic approach, the Salvation Army is now in China, and is applying for government grants. 126 countries down, and only 60 to go for world domination. 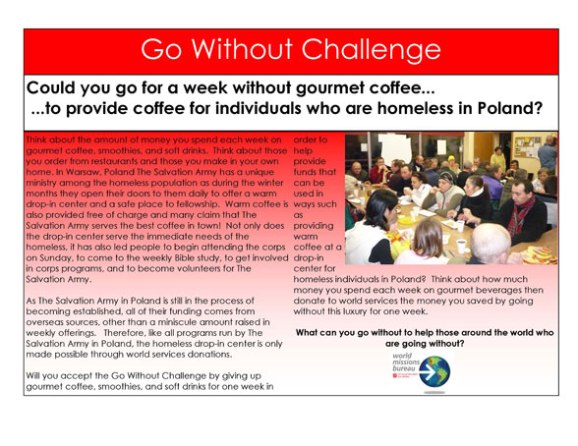